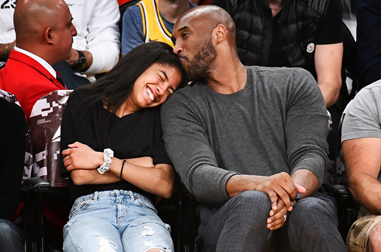 “The mindset isn’t about seeking a result- it’s about the process of getting to that result. It’s about the journey and the approach. It’s a way of life. I do think that it’s important, in all endeavors, to have that mentality.” -Kobe Bryant

While my dad was sitting on the couch and I was playing on the blue, carpeted, floor, there was a Los Angeles Laker game playing. (I don’t remember which one, I was 7 or 8!) My dad rose from the couch quietly excited with his eyes glued to the TV anticipating what would happen.

I’d never seen my dad like this before, so I stopped what I was doing to watch the game with my complete attention- just like my dad.

Because it was my first game, I was entirely focused on how the game was being played. When the game was over, I’m sure I asked him something along the lines of, “Dad, what team were you rooting for?” and he must have said the Lakers because from that point on, we watched the Laker games together with burnt microwaved popcorn, stood up and screamed at the TV together and fought over our favorite players- Shaquille O’Neal (mine) and Kobe Bryant (Dad’s).

As I got older (And Shaq moved over to Miami Heat) I stopped watching basketball with my dad. I never thought I would think about these memories with my dad until the passing of Kobe Bryant.

I am dedicating this to Kobe and Gigi because when I learned that not only did he die, but his daughter died with him, it made me realize how strong of a bond he and his daughter had to have had for God to let them go to Heaven together.

Aside from his incredible work ethic and determination to be the best version of himself on court, I truly believe he had to have practiced that off court, too. Although he had allegations against him long ago, I was never one to involve myself amongst the personal life that of which I don’t know. All I knew and saw was what I watched with my dad- one of the greatest basketball players of all time and a human being reaching his highest potential. An inspiration- someone who chose to rise above every single set back he faced only to come back stronger and conquer as if the battle was his to win. A champion.

One thought on “Mamba Forever”

This site uses Akismet to reduce spam. Learn how your comment data is processed.